For the April 24th reading with Brenda Hillman and Robert Hass, we were not in the University Art Museum at the UCA. This time, we had the prestigious North Ballroom in the LSC because the large crowd of people who came to see these two poets would have knocked all of the art off of the walls in the Art Museum. Being the champion of punctuality that I am, I walked in during Brenda Hillman’s introduction and awkwardly made my way through the rows of chairs before settling in to listen to her poetry.

Hillman read from what she described as a 17 year project in esoteric studies, a tetralogy of poetry books based on the elements of fire, air, water, and earth. Before she started to read, she had a few words to say to young writers:

“Poetry is a really good way to access the most odd and peculiar parts of your psyche.” 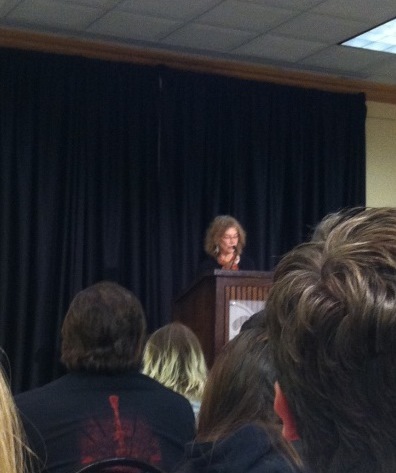 She read a few poems from each of the books in the tetralogy, and shared with the audience a time in her life when she had decided to protest at an army base in Nevada using poetry. At this, she remarked, “I believe in pointless protest … The connection between poetry and outcomes is very tenuous.” After everyone had stopped laughing, she went on to read a poem that yielded my favorite line from her all night, which was “They throw paper dreams and sins upon / the pyre and kiss.”

When Robert Hass came on stage, we were warned that lately, he had been writing a lot about death. The former U.S. Poet Laureate was quite amusing, despite the fact that his poems were entitled things like “Death in Infancy” and “Death in Childhood,” or my personal favorite, a poem simply called “Dream Poem” (which was one of the few that he read that wasn’t about death). He also talked a lot about how it was a poet’s job to describe the environment around them, and read a poem about his own environment.

“We threw white roses in his grave
There’s a green wind on the pond
Summer on the pond.”

This poem used repetition to describe California, and was the last that he read that night. As I guiltily left without buying a book (having forgotten my wallet), I thought that it was understandable that we were unable to meet in the UCA, because the two poets that read to us that night were both engaging, and deserved the crowd that had gathered for them. Even though there was no knit “Batman” suit to accompany the reading, it was entertaining just the same.

Thursday, April 24, 2014, 7:30PM at CSU’s Lory Student Center in the North Ballroom. Hass and Hillman are among our most important contemporary American poets. This is a rare opportunity to hear them, given their limited travel schedule. Please join us for this very special event. The reading is free and open to the public.

Winner of the Pulitzer Prize, the National Book Award, and the Yale Younger Poets Prize, among other accolades, Hass has been a tireless advocate for public engagement of poetry and co-founded River of Words, which seeks to engage schoolchildren in eco-literacy by providing teachers with interactive, interdisciplinary curricula. He teaches at the University of California, Berkeley.

Poet Brenda Hillman is the author of nine books of poetry and winner of a Guggenheim, the William Carlos Williams Prize, the Los Angeles Times Book Prize, as well as a Pulitzer Prize nominee and 2013 National Book Award finalist.

The Reading Series encourages community involvement in and awareness of the literary arts and seeks to engage a broad spectrum of the community across disciplines, within and beyond the university. Special thanks to CSU’s Department of English, Dean Ann Gill, the College of Liberal Arts, OGSW, and ASCSU for their generous support of this event.